More so than Azerbaijan or Armenia, Georgia has many different vocal-based musical dialects, most of which are polyphonic. Georgians are known for their part singing and have over 60 traditional terms to describe the different vocal parts and their functions (Chkhikvadze and Jordania 2014). The regional styles of polyphony vary from simple antiphonal vocal lines over a two-note drone, to complex melismatic or contrapuntal three-part forms. Many commercial performance recordings are available, a result of a recent renaissance that has led to ensembles researching (via archival work and fieldwork), performing and contributing to traditional Georgian songs, although most of these ensembles feature the more complex polyphonic forms (see http://www.alazani.ge). Through international partnerships and support from UNESCO, the International Research Centre for Traditional Polyphony (www.polyphony.ge) based out of the Tbilisi Conservatoire has issued a large number of archived field recordings and hosts an online database.

The discussion on Georgia starts with a brief description of the solo singing tradition which then follows with musical styles from the East (where more of a solo singing practices occur) to the musical styles in the West. While the tradition is an aural-oral one theoretical models postulate the scale system is based primarily on a pentachord, though tetrachords are found in musics of the eastern regions of the country.

Regions of Georgia. Note: 1) Mskheti would more properly be labelled Samtskhe-Javakheti; 2) the map is missing South Ossetia, a break-away region that is located at the top of Kartli, just east of Racha. Ossetia along with Abkhazia are discussed in the posts on the North Caucasus.

Georgians typically do not sing in unison but an across-the-nation exception to polyphonic practices occurs in solo songs – such as mothers lulling a baby to sleep or other solo work songs, usually the domain of women. I would also say that simpler 2- and 3-part polyphony also spans the country, mainly through women’s genres, presumably because the nature of domestic work does not allow women to settle and spend time on more complex musical forms. Generally, however, the eastern side of the county features more solo songs and more simple 2- or 3-part polyphony. Solo songs are often accompanied by panduri (traditional 3-stringed lute) or accordion and have parallels with North Caucasian ballads (which I will discuss more in the post on Bards and Ballads of the North Cacausu). In particular, the Georgians of the eastern mountains (the Khevsurs, the Pshavs and the Tushs) are known for favouring poetry and the composition of verses over music and songs. The opposite is true in the west.

Presumably this tendency to solo musical expression and simple polyphony comes from sharing borders with neighbours who have a solo singing tradition or from the influence of foreign political rule. For instance, there is a large Azeri population on the Georgian side of the Azerbaijani boarder; there are lots of Avars in the borders between Georgia and Dagestan; also high in east mountains (especially Tusheti) Georgians, as shepherds, spend a lot of time in the North Caucasus with their sheep. Another example to consider is Samtskhe-Javakheti which does not practice polyphony. Historically, huge populations of Georgians in Javakheti were displaced by muslims when it came under Ottoman rule in 16th century. In the 1800s, under Russian rule, this region was cleansed of muslims and resettled with Armenians who were fleeing Turkish occupation. Both Muslim and Armenian musics are monophonic and thus explains the lack of part-singing in the region.

A few notes on this one: similar to Azeri music, listen to how the initial melodic development centres around the Bb and uses stepwise development in a rather limited range. It’s also interesting to note how parts of this performance can come across as recitative in nature, a quality found in the music of Azeri ashiqs but also some music of the North Caucasus (though these may further be traced to Central Asian practices). Interesting melodic development (featuring intricate ornamented passages), however, occurs at the 2:30 mark. (More examples of solo voice and panduri performances by Ilia Zaqaidze can be found from http://www.alazani.ge under the “kartli” region page.)

A later post on the Bards and Ballads of the North Caucasus briefly touches on the harmonic-structure of the solo-panduri examples.

There also exists some remarkable polyphonic structures in the Eastern Kartli-Kakheti region which features 2 soloists in the upper voices, stretching out melismatic text over a slow-developing unmetered melody with the accompaniment of a drone styled bass. In most cases the drone bass is limited 2 or 3 notes though there are examples (such as “Kakhuri Mravalzhamier” or “Chakrulo”) where the bass if much more elaborate. In all cases, resolution points occur on the tonic, most often in unison and more rarely on the 5th. Links can be made with these songs and the monodic music of Armenia and Azerbaijan, a subject of Nino Tsitsishvili’s 1989 dissertation. All three countries share similar solo fieldwork songs (e.g. horovela in Georgia and horovel  in Armenia). In the Kakheti-Kartli songs, the 2 soloists are often trading ornamented melodic lines, which Tsitsishvili describes as a “tendency for solo (monodic) performance in a polyphonic context” (1998, 97). Furthermore, 3-part polyphony in archived recordings from this region exhibit drone-like tendencies of the non-leading upper voice and/or parallel harmony of simpler melodic passages in the top 2 voices. While this description fits some moments in some contemporary performances, 3-part polyphony in contemporary Kartli-Kakheti songs tend to be more complex, demonstrating more independence in the ornamentation and embellishments of the upper voices.

This ring dance that celebrates the birth of a son is a 3-part song but because 2 of the voices are trading lines, there are only 2 voices singing at one time. It is interesting to note the contrast between this simple 3-note drone-styled bass and the extreme contrapuntal style for which Gurian songs are known (see Gurian example, Vakhtanguri, below).

EX 1. Shen Bicho Anagurelo (You Boy of Anaguri) performed by Basiani, recorded by A. Kuzmich at the 2002 Opening Ceremonies of the First International Symposium on Traditional Polyphony, Tbilisi, Georgia.

This song initially demonstrates two voices trading ornamented melismatic lines over a drone-styled bass. The 3-part harmony that follows is more complex than what is described of the archived recordings. 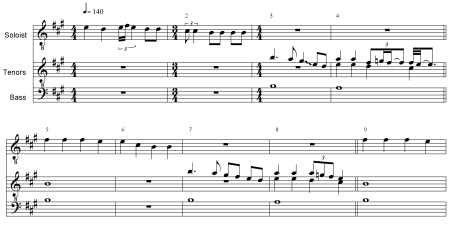 In contrast to the previous example this song presents a less complex version of the Kartli-Kakhetian songs.

The emphasis of the music over the word/text is quite fundamental to the songs of West Georgia (as well as parts of the Northwest Caucasus). West Georgia can be distinguished musically between its plains and mountains. The plains make more use of contrasting polyphony – there is more rhythmic and melodic independence – while the mountains (Racha and Svaneti) display more parallel harmonies – especially of dense triads and can feature parallel movement of 2nds in the top 2 voices. Some harvest-work songs (known as naduri) have four parts.

The greatest amount of independence occurs in Gurian songs, where a regional style of yodeling in the top voice arguably features polyphony in a single voice and adds to the exploding quality of the region’s music.

While some songs from Samegrelo share the same energy as ones from  Guria, others are appreciated for their lyrical qualities which feature minor modes, light melodic lines and a combination of softer harmonies mixed with harsher ones. Imereti is similar to both Samegrelo and Guria, though more Europeanized harmonies (such as parallel thirds) have filtered in through Kutaisi, the largest urban centre in western Georgia situated in Imereti.

EX 1. Didebata (round dance) from Svaneti performed by Riho

The song is in trio-choir format. The top voice in the choir is singing krimanchuli a regional style of yodeling quite specific to Guria with similar variants heard in Achara and Imereti.

EX 3. Maglonia (Magnolia) lyrical song from Samegrelo performed by Polikarpe Khubulava’s choir Odoia. (Khubulava is a renown master singer from Samegrelo. He is most likely in his early 80s.)

Across the country, dance and harvesting songs make use of ostinatos, similarities of which can be traced to the Adighe zhiu and the Abkhaz argizra (see next post on the Polyphony of the North Caucasus).

For more on regional styles of Georgian polyphony see http://polyphony.ge/index.php?m=559.